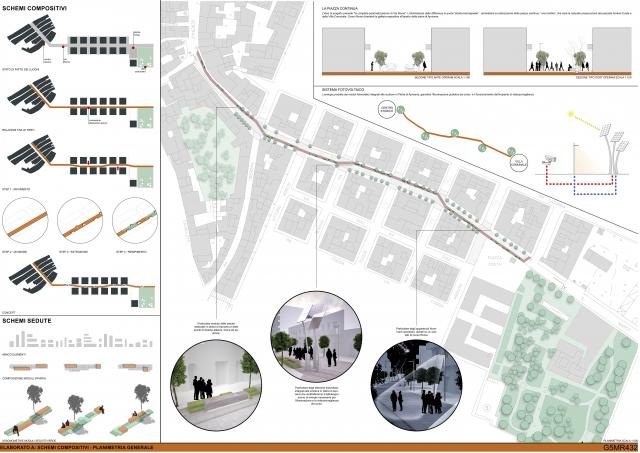 Via Roma is a daily life of the popular and social spirit of Apricena. It's always been about that stream of noisy fervour moving up and down, from side to side. It's passing. It's square. At the beginning it was The Road of cappucini, an external street that connected "the village" with the Convent of the Capuchins, located in the current Villa Comunale. The first section of Via San Marco (the current Via Roma), continuation of Via Mariani (now Corso General Torelli), was designed in 1886, for a length of about 180.00 (at the height of the current Via Puglie). It was later named Via Cesare Battisti, to become during the Mussolinian period, Via Roma. The route of Via Roma connects the Castello, "old directional pole", symbol of the federation's royal power, with the forecourt Andrea Costa overlooking the municipal villa, ex-garden donated to public utility in 1920. The two cores today take on meanings of civil centrality and are confirmed as such for the reach of passers-by. The aim of the intervention is to improve the spatial qualities of Via Roma, enhancing its urban space and enhancing its recognisability through the use of the Apricena stone.

The design idea is to transform the current Via Roma, into "Corso Roma", a continuous square, a "rambla", which is the natural continuation of the forecourt Andrea Costa and the Villa Comunale. The reorganization of the course will take place through the use of the stone of Apricena and the realization of the green, the design of which will give the course, dynamism. The project involves the elimination of the "street-sidewalk" altitude difference, in favor of the construction of "a continuous stone square of Apricena", about 350 meters long, which connects Piazza Andrea Costa with the ancient core of the city. The existing sidewalks, built about ten years ago, in good condition, will be recovered. The project of the pavement of the square continues, took into account the tones and types of stone present on the sidewalks. In the design idea, the local stone becomes the generating element of the architectural composition. The design of the Paving in Opencena Stone "participates" in the creation of the elements of the project:

– the flooring "rises" to become sitting;

– the elements of stone to run define the green.

Corso Roma will become the open-air exhibition gallery of the stones of Apricena. As represented in the tables, it is expected to use multiple types and different formats worked differently, but with the unique goal of giving the course a strong identity and a clear visual perception. The design idea involves the transformation of Via Roma into "Corso Roma", completely at the service of pedestrians. "Corso Roma" will become a living room, where you can walk, go shopping, have a drink, where you can rest in the shade of the plants. There is free wi-fi to serve the visitors and all the activities present. The course will also be equipped with a video surveillance system. Once not very remote, Via Roma was characterized by the presence of works of art in The Stone of Apricena, made by sculptors of international level, which were later located in other areas of the city. A pity, since excluding the sidewalks in OpenHouse Stone and some inserts present on the facades of the buildings, the presence of the stone is really uninfluential. This is why the project foresees the location of "new artistic works" in The Stone of Apricena, which in addition to characterizing the course aesthetically, will ensure environmental sustainability, since they will be supplemented by photovoltaic cells.

The stone sculptures will be located next to the "squares" (the former crossings) and with the integration of photovoltaic modules will ensure the operation:

– of the advertising signs of the activities present.

Course Rome will be equipped with white sewer, to collect and dispose of the meteoric waters. The locks will all be in Openstone.

The project includes the introduction of the exclusive pedestrianity of Via Roma. In order to avoid the vehicle crossing of the new course, it is planned to be installed at the intersections of cameras. The parking of the vehicles of the managers of the activities present and the frequenters, will be guaranteed in the "breaks". The pedestrianisation of Via Roma will involve the foreclosure of vehicle traffic crossings. In any case, the direct connection of the city from north to south (V.le Aldo Moro-Via G.di Vittorio) through Via Vittorio Veneto will be guaranteed, putting in place all systems to slow down traffic so as not to create discomfort to residents. In addition, a "comfortable" roadway will be guaranteed, necessary for the movement of the rescue vehicles of the various suppliers.

General description of the plantThe photovoltaic system will be placed on five independent structures, each of which will house a total of 6 photovoltaic modules. It is therefore planned to install 30 high-efficiency polycrystalline photovoltaic modules (300 Wp) that allow to achieve a total installed power of 9 kWp. The proposed system is grid-connected and the type of connection is three-phase in low voltage. The plant's productionability. The annual energy produced is 11,921.76 kWh. (The following table shows the monthly energy produced) energy and economic sustainability. Thanks to the energy produced by the proposed photovoltaic system, it will be possible to satisfy the annual energy absorption, resulting from the public lighting of the course (lamps and strip LED seats) and the video surveillance system, estimated at around 10 000 kWh per year. The payback of the plant is estimated to be about 9 years old. sustainability.