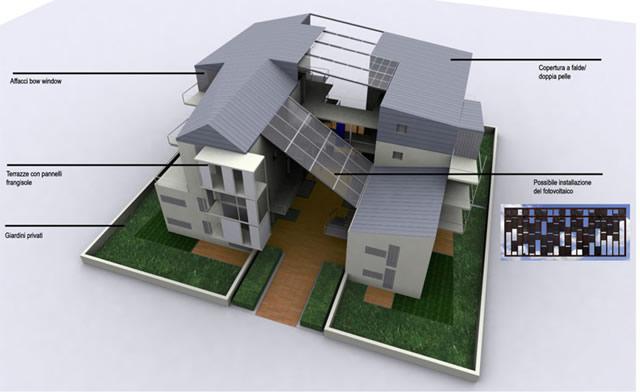 The intervention to take place falls in the territory of the City of Rome, precisely in the area called Torresina 2. The air in question, part of the urban planning instrument in force (P.R.G.), is included in the Urban Quality Program and is part of the Second Plan of Economic and Popular Construction of the City of Rome in implementation of Law 18 April 1962 n167. The project was drafted in accordance with the N.T.A. accompanying the P.R.G. in force. The project was born with the intention of creating an architecture that links history and innovation, center and periphery. It is a modern intervention, which does not renounce some features of contemporary European architecture (the absence of the strict rules of symmetry), but which looks with interest at the historical memory of small towns, where each building is unique and where the sense of belonging of those who live there is strong. The project was completed according to a work programme divided into 6 distinct phases:- study of the area of intervention;- study of the building, with particular regard to "the Roman case" (always characterized by a court that can only be used by the inhabitants housing); – search for a strong and original housing identity for each individual accommodation, so that dominates the sense of belonging of those who live there. A variable, flexible, changing architecture, which becomes mutogen, with spaces that change according to needs;- study of the roofs, creating a "game of aphass" in order to make the intervention unique, sewing the two bodies, each equipped with a strong identity;- study of technology, with a focus on facade systems, where the casing is characterized by the distinction between supporting elements (the structural cage) and the buffering elements, generally light, sometimes made with transparent surfaces, with the aim of creating comfort conditions in the interior, limiting the use of the plants. The intervention includes 4 above-ground levels and a basement for the remittance of cars. As planned, the 16 accommodations will be characterized by a variety of types. Of the 16 parking spaces planned, 10 boxes will be built in the basement; 6 other (discovered) on the surface. In addition, all vehicles will be guaranteed the necessary room for manoeuvre.

Between the two blocks there will be a semi-private space, where the stairwell, thanks to the presence of the continuous glass facade, in addition to serving the accommodations, will relate the two bodies with the area. All rooms of the individual accommodations, including the toilet rooms, will receive natural light, thanks to the presence of windowed surfaces. The property will consist of a c.a. and lateral floors – concrete. The tompagnatures will consist of double brick compartment, with interposed insizing material. ("If the enterprise deems it appropriate", the facades of the two bodies could include ventilated walls, which, thanks to the presence of an gap between the coating and the insulation layer, will allow the natural circulation of the air and, moreover, will protect the "It's not just a bit of a fuss-and-see wall, it's a steam barrier and avoids thermal bridges," he said. The facades of the two bodies will be characterized by the alternation of balconies and bow windows (closed by a series of windows, but if necessary they can be opened) that in the south-facing facade, to favor and control the passage and diffusion of the light through the glazed surface, "could be completed" by horizontal frangis (coming from the sun's rays from above), which allow a remarkable level of reflection of light radiation, between 50 and 80%. The stairwell, made of metal, will be perimerate by a continuous glass facade, made of glazed panels that will have a traditional punctual fixation using cruises and stainless steel caps with perforated and tempered glass (or temperate layered). The distribution walls will consist of drills 8 cm thick. The interior and exterior plasters will be of the traditional type. All rooms will be paved with porcelain gres of various types. The walls of the services will all be covered with ceramic material, up to the necessary height. As for the study of the groundwater cover, a "double skin" was used to ensure microventilation, facilitating the leakage of heated air, thus gaining a caloric reduction of more than 40%, in addition to all other benefits the longer lifespan of the elements that make up the roof due to the absence of mold and the elimination of condensation phenomena. The exterior fixtures and shutters will be aluminum.