Civitacampomarano is a small center where history, culture and uncontaminated nature represent an immense value. It lies 520 meters above sea level along an imposing tufaceous spur in the center of the “Vallone Grande”. Of uncertain origin, the first attestation in the form of Campomarano dates back to 999 AD. Civitacampomarano is an authentic village, committed to a quality path that stands out as a place rich in tradition and culture, but which at the same time opens the gaze towards a wider horizon constituted by the search for innovation and above all towards sustainable development. The real challenge therefore is to reconcile the preservation of identity with growth and socio-economic change. The emblematic testimony of the civitese history is the Angevin Castle, a valuable monument of great historical value, consisting of majestic cylindrical towers, whose front square represents the center of the village where the main roads, Via Roma and Via Vittorio Emanuele converge.

The project aims to strengthen the link between Civitacampomarano and art, enhancing the artistic language of street art, in the wake of the path taken since 2014 with the “ Cvtà street art ”whose goal of making art alive and coloring the walls and shared spaces with it, is combined with the idea behind the work done, aimed at achieving a winning strategy, suitable for to contrast the abandonment and the degradation of the village. The aim of the project is the realization of the UNICUM eliminating the evident fragmentation between the area of ​​the Castello Angioino with Via Vittorio Emanuele and Via Roma , in order to achieve the following objectives:

This harmonious rearrangement will give citizens a renewed living space, usable in safety by all age groups and equipped with a functional green system and furnishings, with the enhancement of lighting design a characteristic element on an architectural and cultural level. The construction of the UNICUM: walking through the areas subject to competition, there is an evident fragmentation of the pavement: the square in front of the Castello Angioino is paved with limestone paving, laid to run , while the n.2 arteries that flow into it are lined respectively with limestone paving (Via Vittorio Emanuele) with the revival of the design of the square, while Via Roma, starting from the square in front of the Castle, is paved on the first stretch with limestone paving, then with porphyry cubes and finally with bituminous asphalt. This fragmentation give a character disorder and marginalization in Via Roma , despite the fact that on the same road there are buildings with characteristic facades, made up of solid bricks, stones and tuff. THE INSERTION OF THE GREEN , or rather a stylized and artistic technical version of plantings, to decorate the facades of the houses overlooking Via Vittorio Emanuele and Via Roma, up to Piazza del Castello, combining art, light and safety . ” The streets ” do not allow the insertion of large plantings. That’s why the choice of ” GREEN PAINTINGS ” which, together with the metallic floral elements, will ensure the decoration of the facades. The elevations of Castello Angioino will be characterized by:

The elevations of the properties will be characterized:

It is a flexible carpet of colored lichen for stabilized vertical gardens that does not require maintenance. ” Redeveloping Piazza del Castello means first of all to excite the residents and strengthen their sense of belonging and identity to the redeveloped place “. Therefore, we decided to tell the story of Civitacampomarano along Via Roma and Via V. Emanuele, up to Piazza del Castello, also involving Via Marconi and part of Via Vincenzo Cuoco ( up to the house of the well-known Vincenzo Cuoco ) . The facades of the lower floors, where possible, will be enhanced with decorative elements with corten steel, with a rust-antiqued effect, on which the story of Cvtà will be told. The rear LEDs will ensure legibility even in the evening. Corten, with its lived-in appearance and intrinsic characteristics of non-deformability and durability, is certainly the material most responsive to the architecture of the place.

We have provided floral sculptures with attached photovoltaic cells to ensure the economic and environmental sustainability of the furnishings, lighting, video surveillance and anything else that can characterize and enhance Civitacampomarano. Each floral sculpture will house a total of 6 photovoltaic modules. Therefore, the installation of 24 high efficiency monocrystalline photovoltaic modules (n. 4 sculptures – 250 Wp) is envisaged which will allow to achieve a total installed power of 6 kWp. The system in question is grid-connected and the type of connection is single-phase in low voltage. Plant productivity : the annual energy produced will be 8,130 kWh . ( The following table shows the monthly energy produced). Energy and economic sustainability: the energy produced by the proposed photovoltaic system will satisfy the annual energy absorption. The plant’s payback is estimated to be around 9 years. Environmental sustainability: 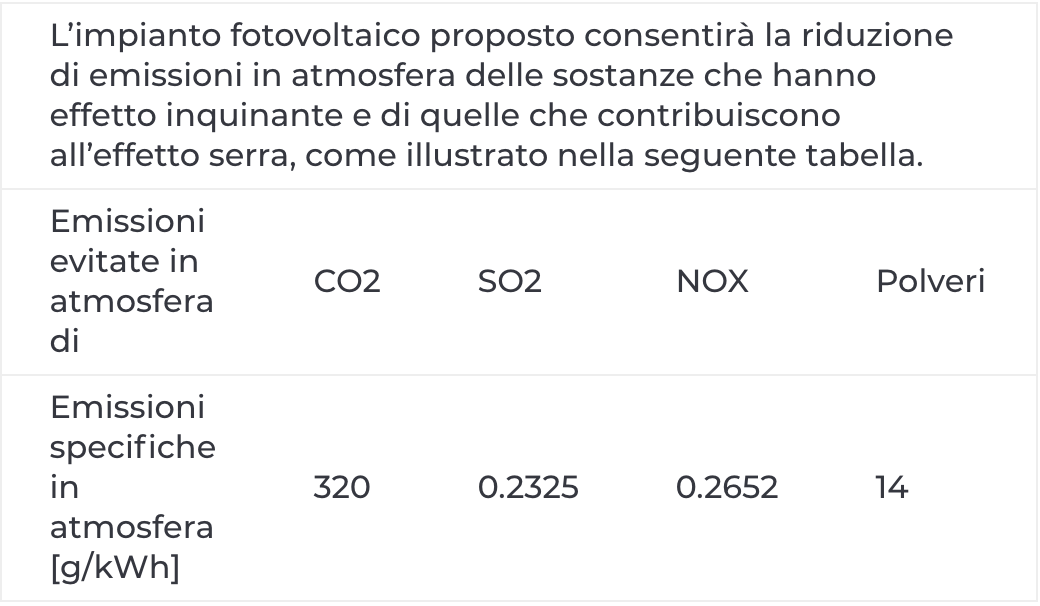 The stones breathe. Once every thousand years and our life is too short to notice
(Fabrizio Caramagna)

LET’S HAVE A COFFEE